While we were housesitting in Sámara, we packed up our bonus dog, Nemo, rented a car, and spent a few days in La Fortuna. It is one of the most peaceful, beautiful places I have ever been, and we all had a wonderful time! If you’re planning a trip to Costa Rica, you definitely want to consider adding La Fortuna to your itinerary. We spent two nights there, and felt it was perfect if you’re short on time. 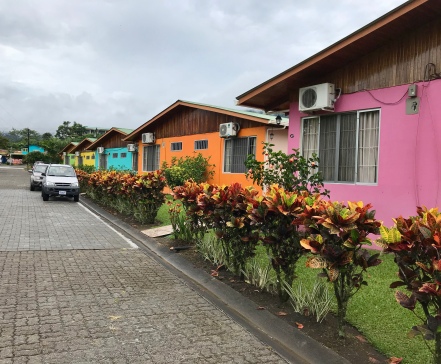 Outside view of the villas at Hotel Villas Vilma. We were in the turquoise one!

Every villa has a front porch like this one that looks out over the park-like hotel grounds, straight at Arenal Volcano.

Not fancy, but clean and spacious! The twin bed near the window has another twin trundle underneath.

The villas also have kitchenette areas with a sink and fridge. No dishes, so bring your own. No microwave, either, but there is one in the lobby that is open for guest use. 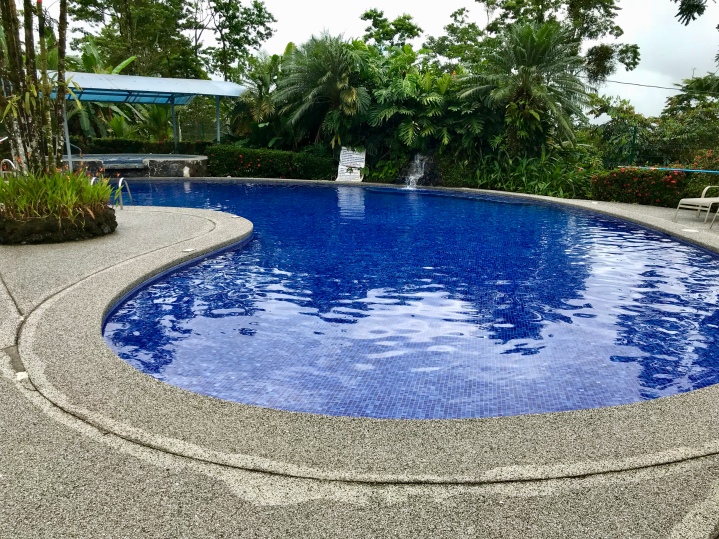 The pool area is beautiful at Hotel Villas Vilma.

We stayed at Hotel Villas Vilma, a small hotel located outside the downtown area of La Fortuna. As the name implies, the rooms are villa-like, very spacious, and amazing for families (and they allow pets for an additional $10USD/night). Our room had a double beds and three twin beds–every kid got their own bed, which is a luxury for them these days! All rooms are ground-floor, with outdoor patios that open up onto the gorgeous, park-like grounds, with a view of Volcán Arenal. It was incredibly tranquil, but we were also there in October, which is low season, and our first night, we were the only guests. The pool is beautiful, and while there is a hot tub, it’s more warm than hot. I would have preferred a few degrees hotter. I definitely recommend Hotel Villas Vilma.

Downtown La Fortuna is quaint and pretty. We didn’t really spend any time there, but it looked like a nice place to walk around. With so many natural wonders to see, we had other priorities!

We took the hike to La Fortuna Waterfall, and there really are no words to adequately describe it’s beauty. It’s located inside a nature preserve in the mountain jungle outside La Fortuna. Swimming in the waterfall itself is not allowed, as it’s very fast and would be really dangerous. They told us that standing under the waterfall carries the same amount of force as being hit by a semi truck. Adults and older kids are allowed to get into the pool, but must stay away from the waterfall. The kids (and John) spent a long time playing in the river near the waterfall, trying to catch fish by hand (spoiler alert: they didn’t catch any).

Did I mention there are a lot of stairs? Over 500! 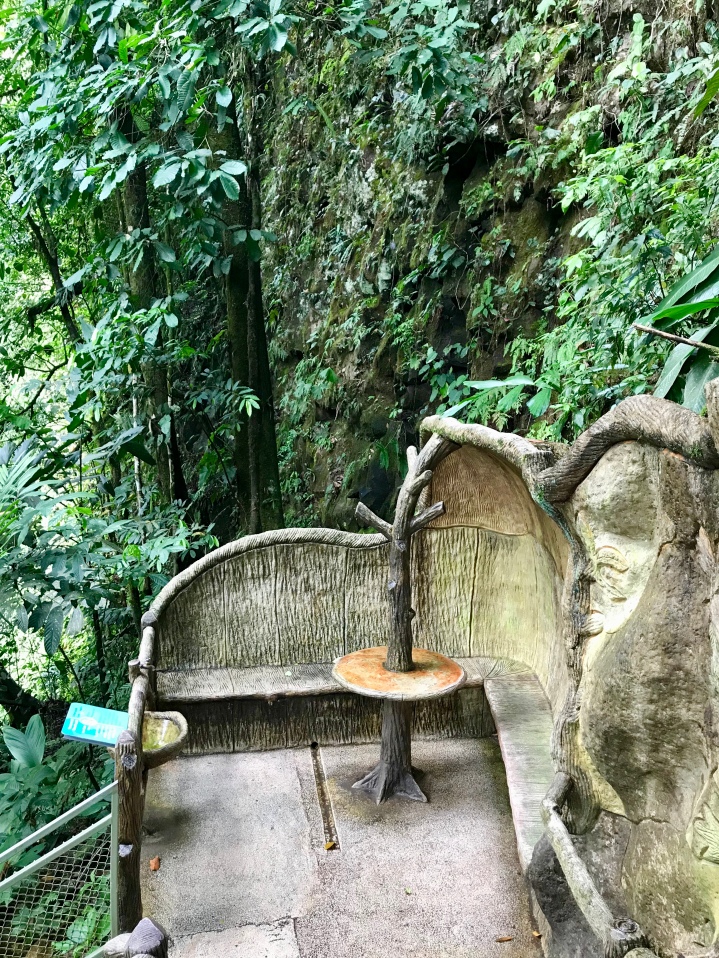 One of the resting spots for the way back up!

This hike is suitable for anyone who can walk a decent distance. There are stairs all the way down–a lot of stairs!–which means the hard part is coming back up. They’ve prepared for this by building in lots of resting places along the way.

There are countless paid aguas termales in the La Fortuna/Arenal area, ranging from a few simple pools to hotels with literally a dozen different pools of different temperatures. We decided to forgo the paid thermal pools in favor of Río Chollín, the thermal river. We have been to lots of natural hot springs, but they’ve always been pools, sometimes located near a cold river. We had never seen an entire hot spring river, and it was a sight to see, for sure. The best part is that it’s completely free!

The entrance to Río Chollín is a bit hidden. Thankfully, there is always a guy or two “helping” people park their cars and watching over them while they are in the river. Yes, you can park on your own and probably find your way down to the river, and avoid paying the guy. Then again, he’s not asking for much (1,000 Costa Rican colones, about buck and a half in USD). Personally, I’m always game for supporting entrepreneurial spirit, especially when it doesn’t cost me much. And the guy did show us the easiest path down to take with the kids. 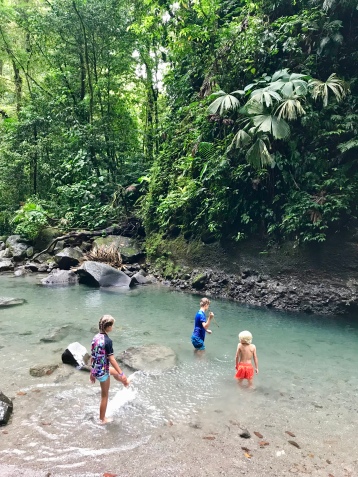 “Spear fishing” in the river near La Fortuna Waterfall.

Just look at that view!

To get to Río Chollín, head west from La Fortuna, and park on the side of the road near Tabacon Resort. A guy will be there guiding you as to where to park, though you probably won’t need it, because you’ll see other cars parked there, as well. After you walk down to the path to the river, just pick a spot to soak! The entire river is warm, and people have built up rocks to make little pools in the river. It’s not hot, more warm, which is great for kids; lots of people pack picnics and drinks and spend the day soaking. The location has been mapped on google now, so it’s not as hard to find as it once was. We didn’t get any photos of Río Chollín, because, well, phones+kids+rivers=bad news.

Another big draw in the La Fortuna area is Volcán Arenal, located inside Arenal Volcano National Park. There are endless trails on and around the volcano, many of them suitable for even very young children. We skipped the volcano while we were there, as we have explored other volcanos in Guatemala, and were more interested in some of the other draws. If we had spent one more day in La Fortuna, we would have spent it at the volcano.

On our way back to Sámara, John had to go see the “Avatar Tree of Life” tourist trap that we saw signs for on our way to La Fortuna. The tree is a ceiba tree, said to be over 500 years old, and it’s covered in orchids. It’s located on a private farm, and the farm owners have added an entrance fee (a very small one). More Costa Rican entrepreneurial spirit! I have to give John credit for this one: it was actually really cool! Worth the price of admission if you have time to stop. Do be prepared to hike up a hill, and wear shoes (not flip flops like I did).

It even has it’s own plaque–can’t beat that!

The views of Lake Arenal from the hill where the tree is located are gorgeous! 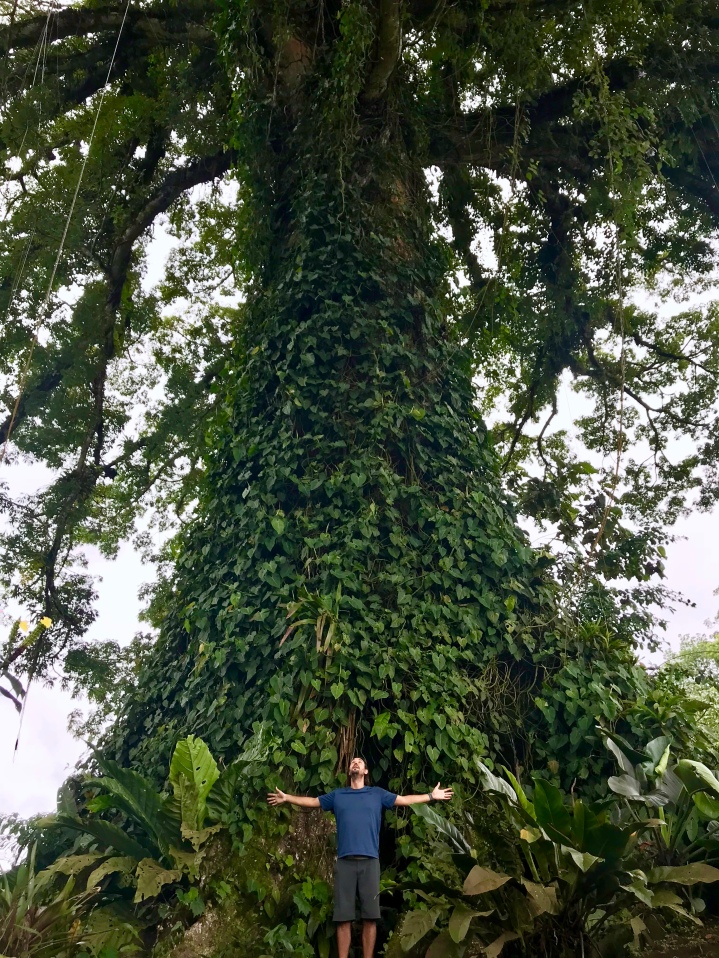 Photos really can’t do this tree justice, but for scale, John is 6 feet tall.

We also stopped by Centro de Rescate Las Pumas/Puma Rescue Center on our way home to Sámara. It’s a non-profit organization that rescues animals, largely from the illegal pet trade. All of the animals at the center cannot be reintroduced into the wild, and it’s likely to be the only way you’ll see a jaguarundi, leopard, or other big cat in Costa Rica, as they are nocturnal and notoriously shy, as well as endangered. It wasn’t a spectacular place to visit, but the kids enjoyed it, and we were happy to help support further rescue efforts with our entrance fees.

And just for fun…here’s a photo of the roadblock we encountered on our way to La Fortuna. A truck with power lines and broken power pole draped across the top of it! It looked to us like the truck was too tall, and had taken out the power lines while driving, but who knows? Driving in Costa Rica is always an adventure!

Have you been to La Fortuna/Arenal and have tips to add for other readers? Do you have questions about the area? Drop a comment!

This site uses Akismet to reduce spam. Learn how your comment data is processed.